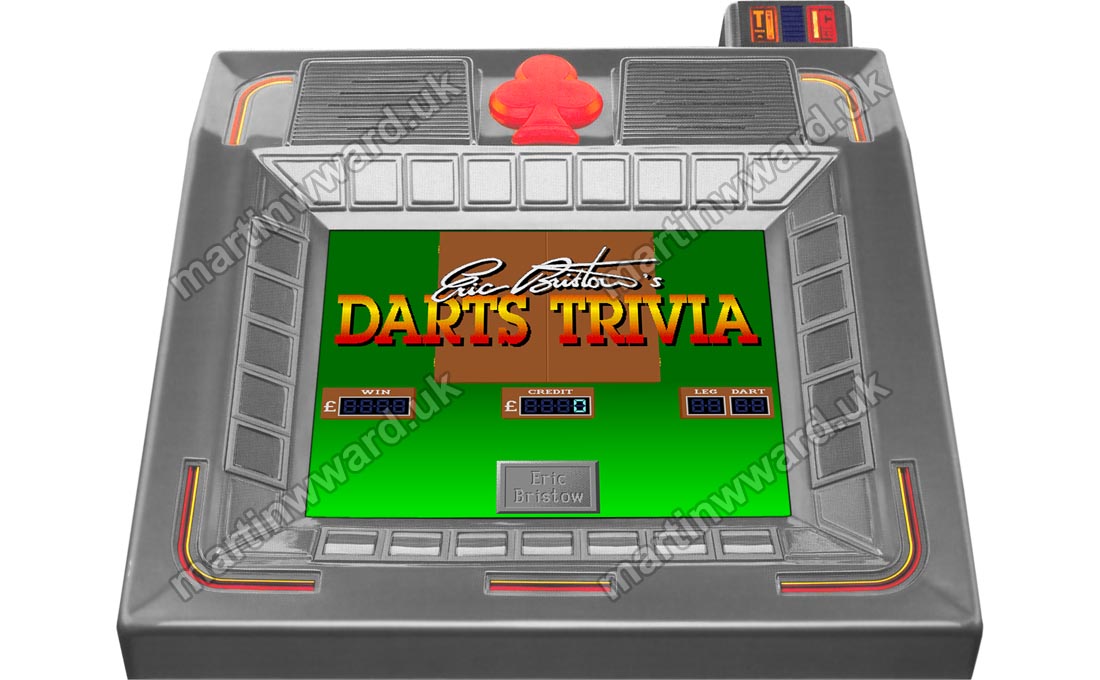 This game is easy to play, you don't even have to play darts!

You can play 501, 301 or 101. Each time you get a question right, the amount of points is subtracted from the score. When you reach zero, you've won a prize. Then you can have another question to double your prize. But be careful, if you get that one wrong, you lose.

So why don't you test your knowledge, and play our great game!

The player is presented with a dartboard, and 3 rows of coloured cards. The numbers on the cards represent a target area on the dartboard. Each card is colour-coded according to its question category:
The game uses a question database with questions classified as either EASY or HARD. The question difficulty for each card is as follows:
The player selects a question category (and a target on the dartboard), by pressing one of the 4 flashing buttons under the front row of cards.

The player is then shown an image, or a video clip, and must answer a multiple choice question about it. Images usually begin completely black, and are revealed using a variety of digital video wipe effects. Images are generally only fully visible after two thirds of the question time has elapsed. This gives the game a unique twist that is absent in traditional text-only quiz games. In addition to the player enjoying the moment when they realise the answer to the question, there is also the satisfaction at the instant that they recognise the image being revealed.

The player is allowed one wrong answer per game. The game ends if:
The image wipe effects used in Eric Bristow's Darts Trivia include:
After selecting an answer, the player's dart is thrown at the chosen target on the dartboard:
The bottom row of cards is then removed, and the next two rows move down.

After 3 questions have been answered (and 3 darts thrown), the player's 3-dart score is removed from his total, and the new total is chalked up on the score board. For certain top 3-dart scores, the compere appears in a video window, and exclaims the player's score in classic TV-darts fashion (e.g. "ONE HUNN-DRED AND EIGH-TEEEEE!!").

Three new rows of cards are then brought into view (the next 3 darts).

Each game consists of 12 legs. A prize is awarded at the successful completion of each leg. The prize values increase from 20p or 25p, for the first leg, to £5 for the 12th leg. After the 12th prize has been won, the player will have accumulated the £20 jackpot, and the game ends.

Each leg starts on 501, 301 or 101 points. When the player's score reaches zero, the leg finishes, and a cash prize is awarded. The player is allowed one incorrect answer in the first leg. Subsequent incorrect answers result in the end of the game.

To end a leg, the player must throw a double. The computer ensures that there is always a suitable category card available, and that the player is never forced to bust their score.
After the player has answered a potentially prize-winning question (a double to finish a leg), a split-screen full screen video clip is shown, with Eric Bristow throwing the dart at the target double:
If the player successfully completes a leg, the score is reset to 501, 301 or 101, and a new leg begins.

Every time a different question category is answered correctly, one of six available bonus squares lights up. When all six squares are lit, the player is awarded 3 FREE DARTS. The computer then picks a dart (a SINGLE where possible), from each of the next 3 rows of cards, and throws the darts automatically, without the need for the player to answer any questions.
At the end of the game, if the player has won a prize of not more than £10, a DOUBLE or NOTHING GAMBLE is offered.
The DOUBLE or NOTHING GAMBLE consists of a circular board divided into 12 coloured segments. Each colour represents a different question category. The player chooses one of the available segments, and it is eliminated from the board. The player must then answer a question from the category indicated by the segment's colour:
When selecting a question category, if the player eliminates the last remaining segment on the board, a bonus MYSTERY PRIZE is awarded. The board is then reset, and all 12 segments are restored, ready for the next time the gamble is played.

Martin created the design, developed the code, and produced all of the initial graphics for Eric Bristow's Dart Trivia. Martin also scripted and supervised the Eric Bristow video shoot, and oversaw the video post-production, and CD-ROM mastering.

The full frame digital video clips of Eric Bristow were shot by a video production crew using professional Betacam video cameras. Martin scripted the video shoot, which was carried out in a pub in Derbyshire. Video clips were required for:
At the time of the video shoot, the game itself was already virtually complete. This made it feasible to transport the game, together with its MEC cabinet, to the video shoot location, and use it as a prop in the filming. Having the game on site, while filming Eric, presented Martin and the camera crew with some great opportunities. Eric's instruction video begins with a great zoom out, from the game screen itself, to reveal Eric standing by the same cabinet that the player would actually be playing the game on. 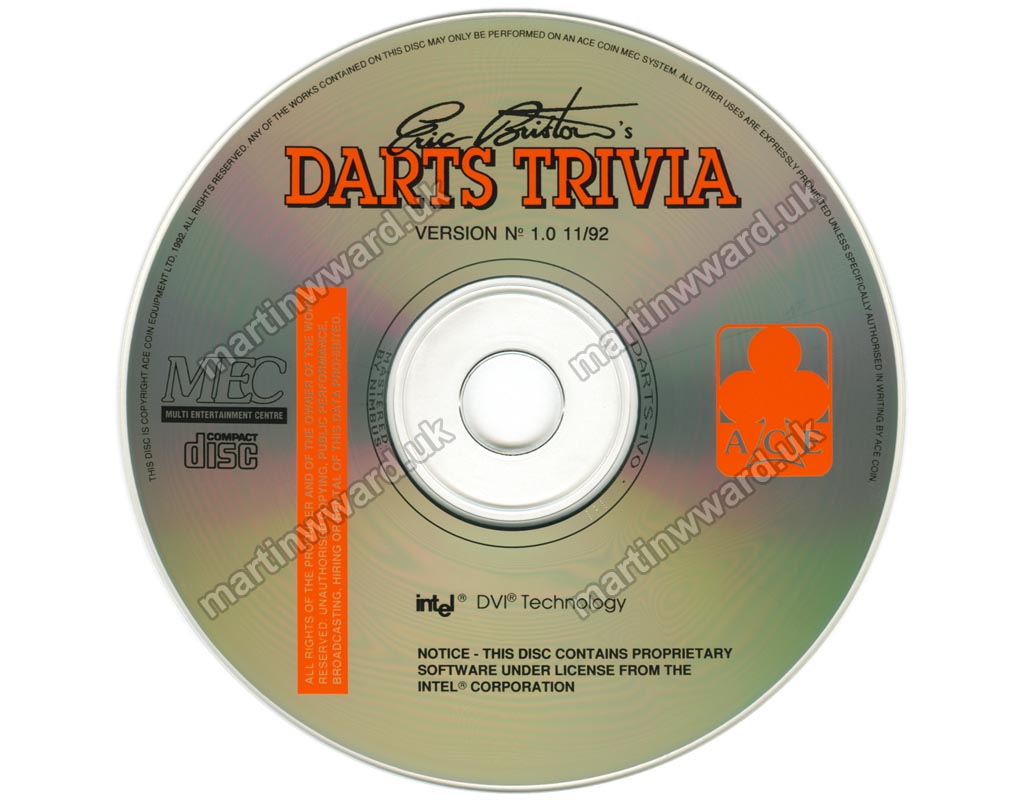 Martin supervised the compilation of the video clips, and the choice of Quantel video effects used in the production of the game's zero credit video attract sequences. This was carried out at Signalvision's video production facility, in Knutsford.

All of the video clips for the game were then sent on Betacam tape to Intel's DVI digital video facility in France, where PLV video files were generated. PLV (Production Level Video) is the highest quality DVI compression available, and is used for 25 or 30 frames per second full screen digital video.

When the final PLV files were ready, Martin prepared padded versions of them for optimal CD streaming playback from within the game. The entire file set for the game was then assembled on various hardrives and CD-R discs and taken to the Nimbus CD production facilty in Wales, for the production of the game's silver CD-ROM discs. The game was published on a single full capacity 680 MB CD-ROM. 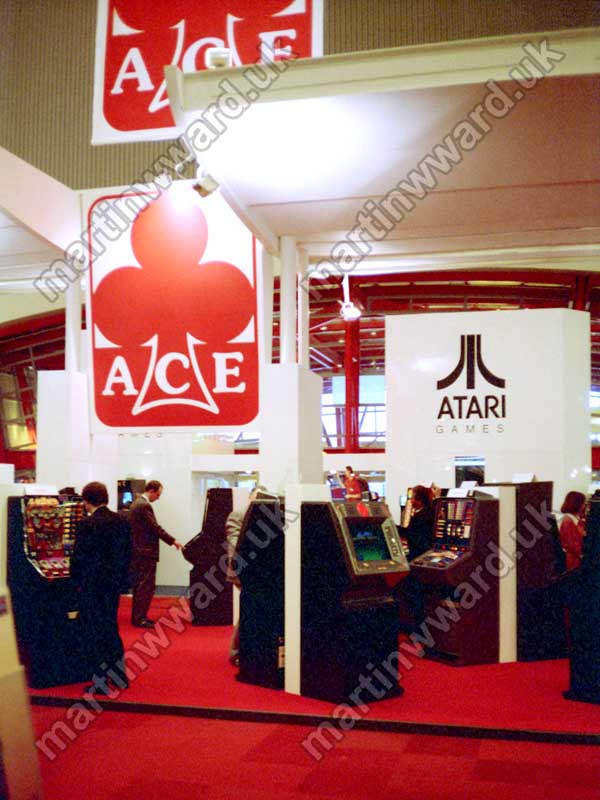 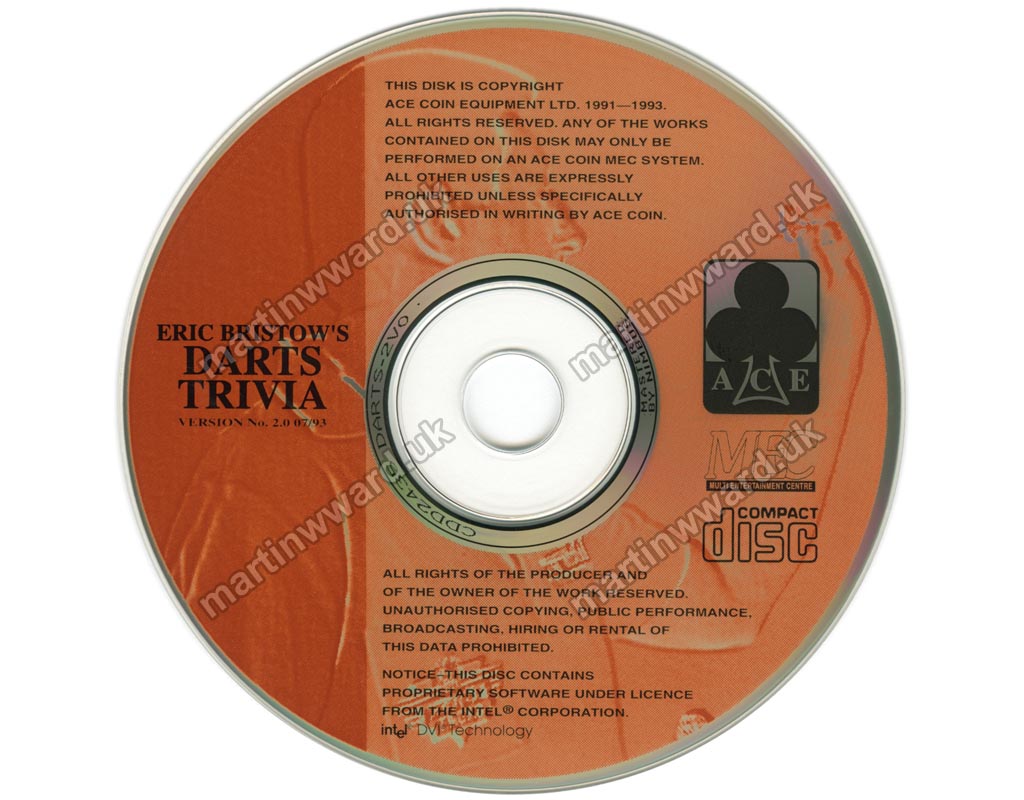 Later in 1993, ACE introduced its SmartKey dongle system for the MEC cabinet. All MEC game CDs, including Eric Bristow's Darts Trivia, issued from 1993 onwards required a valid SmartKey to be present in the machine's RS-232 port, in order for them to function. 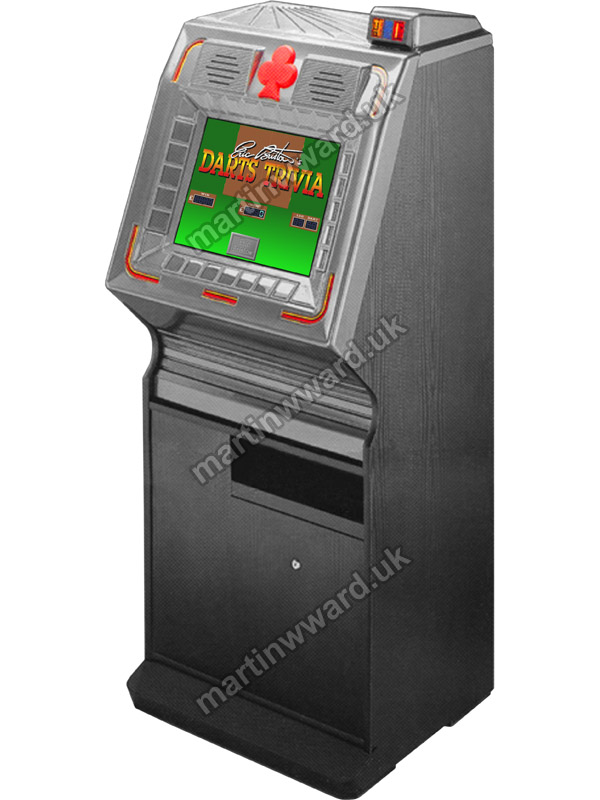 It is worth noting that, in 1992, MPEG, Video CD, DVD video, etc, had not yet been invented, and that when Eric Bristow's Darts Trivia was released, with full screen full motion digital video, it was truly state-of-the-art. It was another 7 years before an SWP was produced using technology comparable to that of ACE's MEC video SWPs, and then, even with games such as Who Wants To Be A Millionaire in 1999, all the questions were still text-only.