Robo Buck's Garage is a 5-reel slot game with a post-apocalypse robotic steampunk theme. The game has 30 win lines, and features a giant wheel of fortune, where the player has full control of the speed of spin.

Once upon a time in the dusty New Mexico desert, a hard-working mechanic named Buck Jackson opened his new business. It was called 'Buck's Garage'. Fast forward 1500 years, one climate change disaster, and one zombie apocalypse later. All humans are extinct, and only robots that have evolved from human technology remain. S.P.U.D. is one of these robots. He's always loved neon lights and slot machines. After many years roaming the long empty roads, S.P.U.D. stumbles across Buck's Garage and decides to convert it into his very own giant slot machine. Scavenging parts from crumbling casinos and rusty scrapyards, S.P.U.D. finally completes his masterpiece. Re-naming the old garage, S.P.U.D. flips the power switch and the neon lights come on. ROBO BUCK'S GARAGE is open for business!

The player is invited to join S.P.U.D. for some fun with his wondrous contraptions. Cash prizes can be won on any of the 30 win lines, or from the Prize Wheel feature, where the player controls the spin of S.P.U.D.'s giant neon wheel of fortune. Every segment of the Prize Wheel has either a cash prize, or a bonus.
To win, the player must match 3 or more reel symbols on a win line, or have 3 or more Wheel scatter symbols anywhere in view. All line pay symbols must appear on a win line and on consecutive reels beginning with the far left reel. Only the highest win is paid on each win line. Coinciding wins on different win lines are added. Scatter wins and bonus wins are added to pay line wins. The wild star symbol is WILD, and substitutes for any symbol except the Wheel scatter symbol.

S.P.U.D. will, at random, use one of his contraptions to re-spin reel 5 to improve a 4-of-a-kind win, or reels 4 & 5 to improve a 3-of-a-kind win.
3 Wheel scatter symbols in view triggers the Prize Wheel Bonus. To spin the wheel, the player drags it clockwise, at their desired speed. The prize that the wheel stops on is awarded.
The Drive In Bonus is triggered when the Prize Wheel stops on a Drive In segment. The player selects any of the squares to reveal a symbol. Finding 3-of-a-kind of any symbol awards a prize and ends the bonus. Finding the star symbol awards an addtional cash prize. The bonus ends when 3 "X" symbols have been revealed.
The Road 66 Bonus is triggered when the Prize Wheel stops on a Road 66 segment. The player clicks 'SPIN' to reveal the number of steps to propel S.P.U.D. along the trail. Each step of the way awards a cash prize. Revealing 'STOP' ends the bonus - the accumulated total win is awarded. Completing the trail awards the Robo Buck's Garage Bonus.

Bonus Prize Spins are awarded when the Prize Wheel stops on a Prize Spins segment. During Prize Spins, the middle reel is replaced by a giant wild symbol which increases the chance of winning lines. The Prize Spins bonus ends when all 5 prize spins have been used.
If the player chooses to, they can gamble their winnings up to the maximum win in S.P.U.D.'s Gamble Game.

The player can spin the wheel at any desired speed

When developing Robo Buck's Garage, Martin built on the previous design and development work that he had done for the Prize Wheel in Spinner Takes All.

On the more basic mobile HTML5 version of Robo Buck's Garage, the Prize Wheel is spun at a pre-determined speed using a simple button press. However, on Martin's Flash version of Robo Buck's Garage, the player has full control of the Prize Wheel. The player can:
After the wheel has been set spinning, it slowly decelerates until it stops with the pointer indicating the final destination segment. Martin modelled all of the motions of the wheel using real world physics. 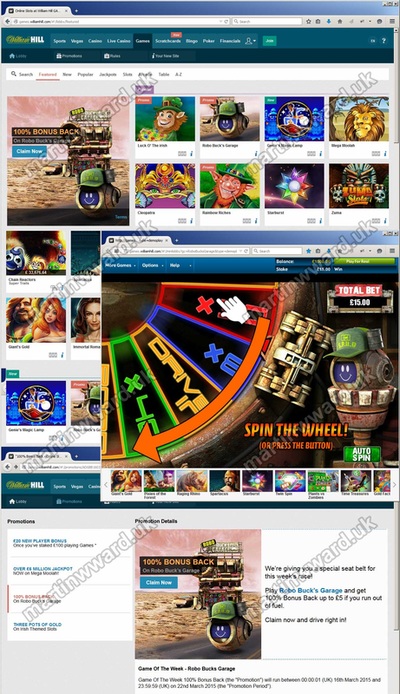 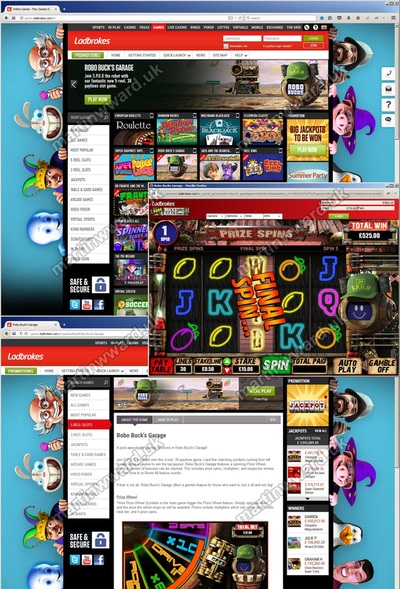 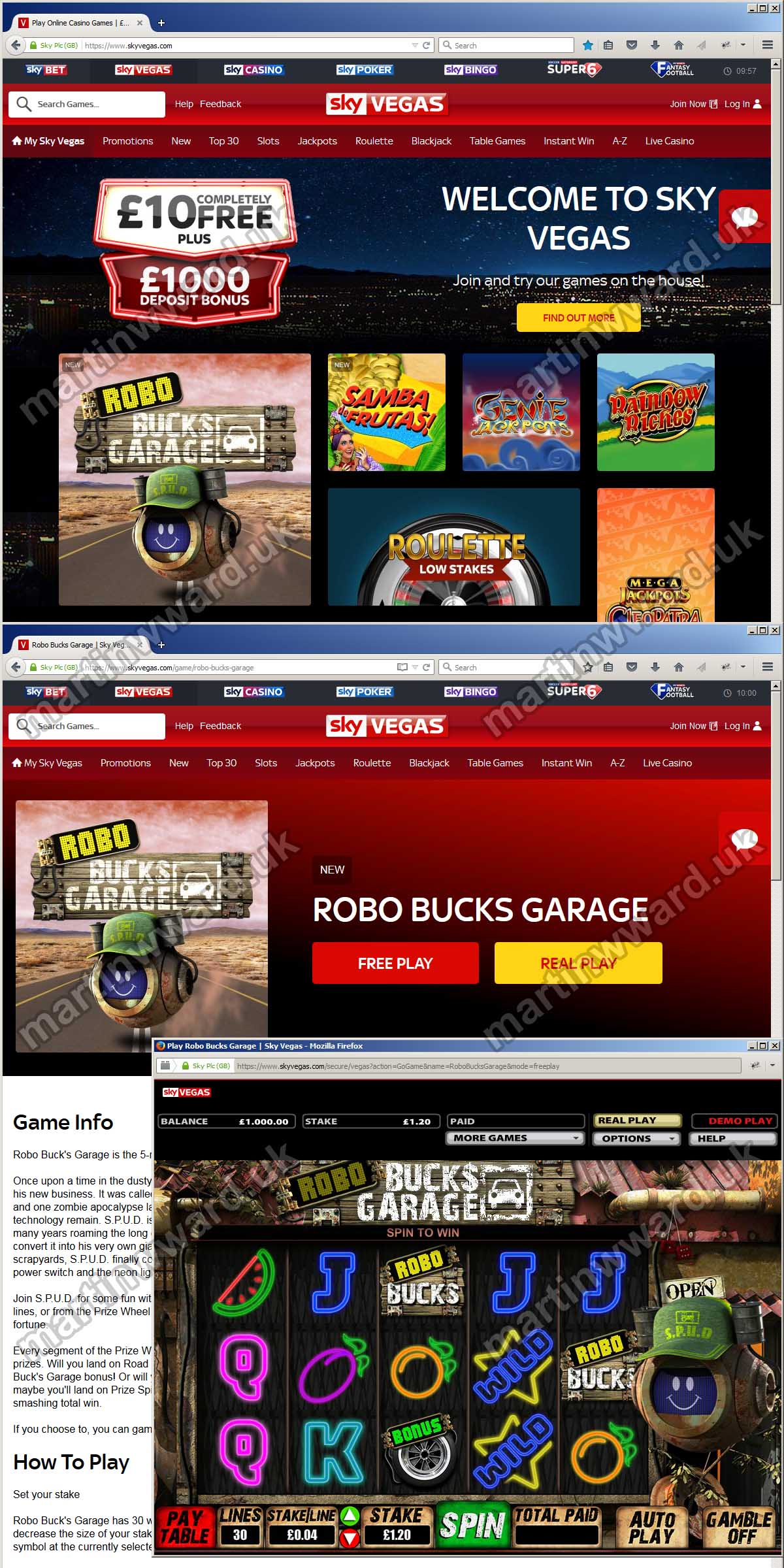 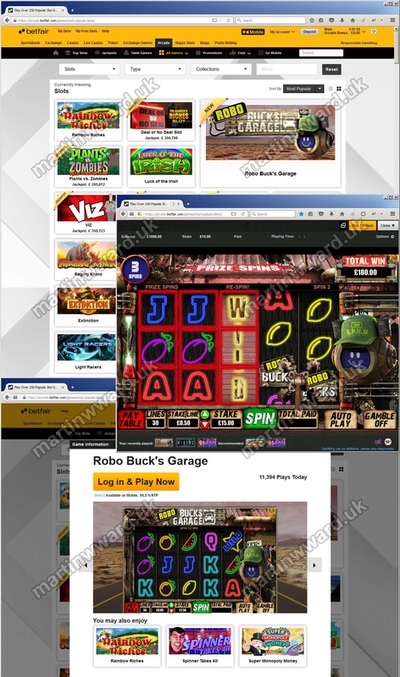 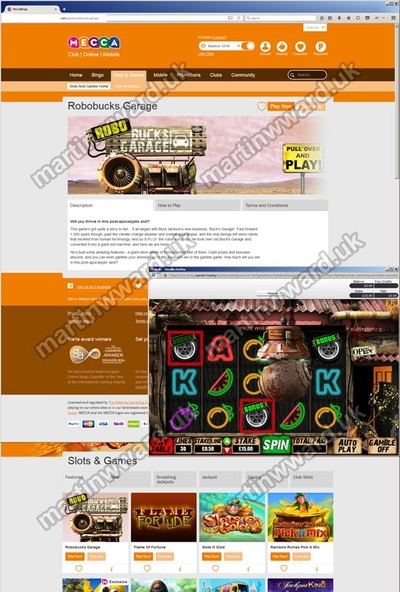 Robo Buck's Garage went live on William Hill in March 2015. It was subsequently launched on other platforms including SkyVegas, Betfair and Ladbrokes.