Nexus is a multi-game Skill With Prizes (SWP) pub quiz platform. It features an operator-friendly GUI system menu, and a smart 'Game Manager'.
The Nexus game menu is the first screen that the player sees after they have inserted credit into the machine. There are two game category tabs, SKILL and QUIZ. Pressing either of these tab buttons displays a selection of games from the chosen category.

Each game menu screen can display up to 12 different games. Each game is represented on the menu by an animated icon. When fewer games are present on the menu, larger game icons are used. Touching a game icon, triggers the launching of the game. The player can also control the machine's sound volume from the game menu.
When the service door is opened by the machine's operator, the Nexus system menus can be accessed. Each system menu page is accessed by pressing one of the labelled tab buttons at the left of the screen. The menu pages are:
The GAME MANAGER screen is where the operator controls the installation and availability of the games on the system. Games for each category are handled separately. The operator selects the menu for SKILL games or QUIZ games by pressing the corresponding tab button at the top of the screen.

All the games that are installed on the system are shown in the form of icons in the central INSTALLED window. Every game requires an iButton, programmed with a corresponding game code, to be present in the Nexus iButton holder. If a game's iButton authorisation code cannot be found by the Nexus system, then the game will not allow the game to be played. The game's icon will be shown shaded out.

The MENU window can accomodate up to 12 authorised installed games. In manual game manager mode, the operator selects the games available to play, by dragging each chosen game icon from the INSTALLED window to one of the 12 slots in the MENU window. Any game can be removed from the available-to-play MENU, by first pressing the chosen game's icon, and then pressing the REMOVE GAME button.

To install new games onto the system, a game CD or DVD is inserted into the DVD-ROM drive. Each game on the disc shows as an icon in the GAME INSTALLATION window. The operator selects one or more of the games by pressing their icons. Then:
Any game can be completely removed from the system by selecting its icon in the INSTALLED window, and then pressing REMOVE GAME.

If any of the automatic Game Manager modes have been selected in the MANAGER SETUP screen, the Nexus system automatically selects the best-performing games for the available-to-play MENU. After each pre-selected UPDATE period, each game's performance is re-assessed by the system, and the poorest-performing game is replaced on the MENU by another INSTALLED game. If an operator has one particular game that they want to remain on the menu at all times, even if it performs poorly, then this can be done by pressing the chosen game's icon on the INSTALLED window, and then pressing the SET AS FAVOURITE button.
On the CONFIGURATION screen, the operator can set the machine's payout percentage, volume level, date and time. Common system settings can also be set, including whether certain parameters should be shown in the system's collector refill mode. Zero attract sound can also be switched on or off.

The MANAGER SETUP screen displays the performance STATS of the installed game. Both LONG TERM and SHORT TERM stats are recorded. Short term stats can be cleared by pressing the CLEAR SHORT TERM button.

The Nexus Game Manager is also controlled from this screen. In the GAME MANAGER SETUP window, the AUTO, LO, MED, and HI buttons set the parameters for automatic operation of the Nexus Game Manager. In automatic mode, the Game Manager assesses the performance of each game on the menu over a set period, and updates the games on the menu according to their performance over this period. The operator can set the UPDATE period to 1 or 2 weeks. If the operator selects the OFF button, then the Game Manager operates in manual mode, and the operator has full control of which games are on the menu.
The MONEY screen, allows the operator to test the machine's £1 coin hopper, and to test the coin divert mechanism. The hopper can also be emptied, and its contents automatically counted.

The SWITCHES screen allows the operator to test all of the machine's hardware inputs, including the service and cash door switches, and the refill key. The status of all installed iButtons, or "game dongles", is also displayed.
The SCREEN test menu allows the operator to test and calibrate the machine's LCD touch screen monitor. The monitor's native resolution is 1280x1024 pixels. The majority of installed games run at screen resolutions of 800x600, or 640x480 pixels. For optimal performance the touch screen can be fine adjusted by pressing each of the two CALIBRATE buttons and by following the on screen instructions. Pressing the TEST button, allows the operator to test the accuracy of the touch screen by displaying a cross hair mouse while a finger is dragged around the screen.

Various test images can be displayed. These images are designed to aid the operator to fine tune the display's horizontal and vertical positioning, and to adjust colour, brightness and gamma settings. Various logo screens can also be displayed, for show and presentation purposes.

The METERS screen displays the values of all hardware meters, such as cash in, cash out, etc. All hardware meters on the Nexus system use the latest S.E.C. techonology. All logged errors can also be viewed on this screen. Pressing the CLEAR ERRORS button clears the error log.
The first time the Nexus system is powered up, an INITIALISATION screen is shown. At this point the machine can be setup for standard operation, or for one of two special operation modes:
These modes can be set permanently or temporarily.

During game installation, the Nexus system displays the progress of all file copying, and game verification.
Nexus has two refill modes. Both modes require the insertion of a refill key, and for it to be turned. Putting the machine into refill mode allows the operator to top up the £1 coin payout hopper.
In LANDLORD REFILL mode, the operator can also set the sound level and, depending on the machine's configuration settings,
basic accounting and game high scores can be viewed.

In COLLECTOR REFILL mode, the operator has all the functionality of landlord refill, plus access to the payout hopper. The hopper can be emptied, or topped up to the nominal float amount.

Software development of the Nexus system commenced in late December 2003. The schedule was very tight, as a launch date of the third week of January 2004 had been promised.

The Nexus shell needed to communicate with lower level systems, such as coin handling and meters, in addition to handling messaging to and from Nexus games. Development work on the Nexus shell was split between two JPM software engineers. Martin was tasked with the development of the operator system menus, and the smart Nexus 'Game Manager' functionality, whilst the front end game menu was developed by a colleague. Martin also liased with ECM Systems, the third party supplier of the Nexus 'Powerhub' coin handling hardware.

In August 2004, Martin produced a dedicated AWP version of the Nexus shell. This later formed the basis of the video shell used in JPM's dual screen Prestige and Tornado cabinets. 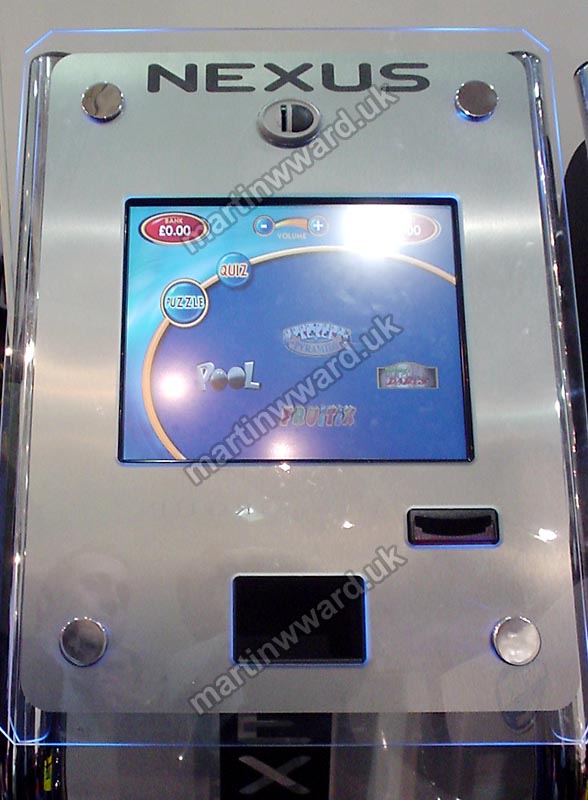 By the third week of January 2004, development had progressed so well that, not only was the Nexus SWP games system able to be announced at the London ATEi trade show, but it was also possible for visitors to play live games on any one of the ranks of machines that were exhibited on both JPM's and Maygay's stands. Potential customers were also able to view the system's user friendly system menus, and see how easily games would be installed and managed on the machine.

By Spring 2004, Nexus had a lot going for it. It was out in the field; a state-of-the art game system, compatible with all pre-existing ItBox games, housed in an attractive modern chrome and brushed-aluminium cabinet, with the latest LCD flat screen monitor, and blue LED illumination technologies. It had been made ready to ship in record time.

Nexus was launched jointly by JPM and Maygay at the London ATEi trade show in January 2004. Game updates were released on CD and DVD game packs thoughout 2004 and 2005, including, in April 2005, a bumper DVD of JPM and Maygay games, which included the following games:

A further disc, released in December 2005, included the following games: