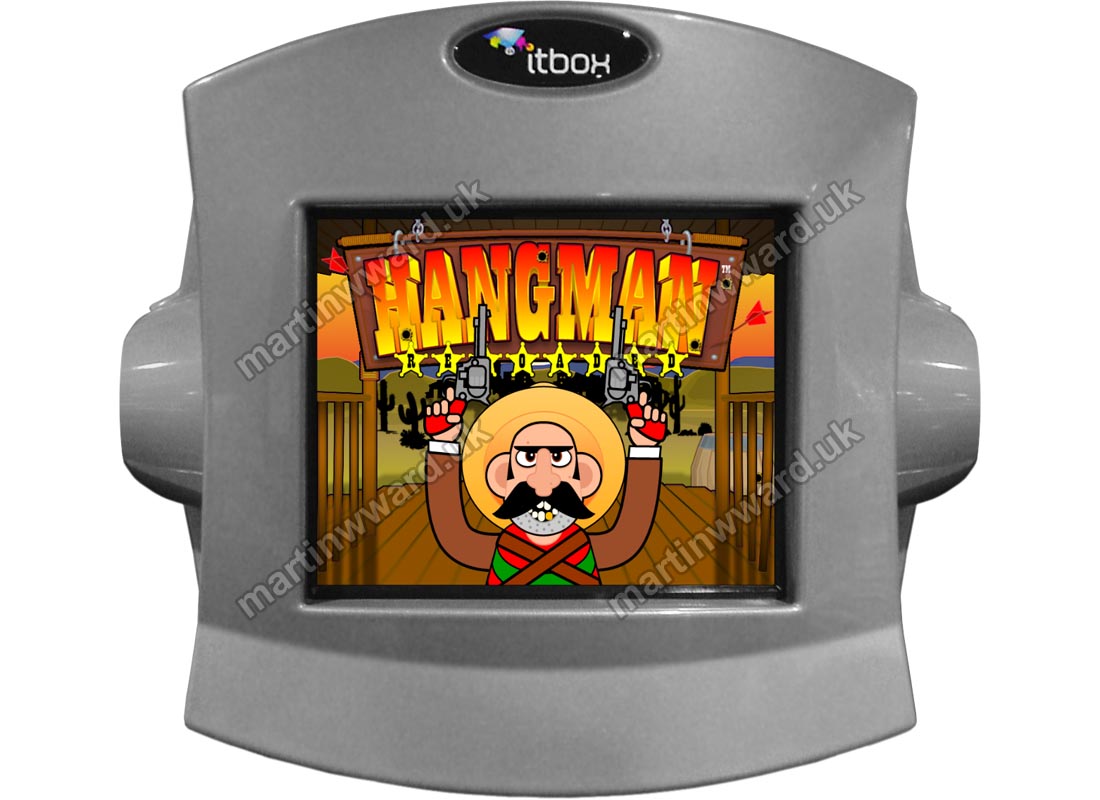 Hangman Reloaded is a cowboy and Mexican bandit-themed pub quiz game with instant cash prizes. It is a £20 jackpot multiple choice question and answer video SWP game. The game is based loosely on the traditional paper and pencil Hangman word game.

Choose your CLUE and attempt to solve the MYSTERY PHRASE before you're lynched! Choose a LETTER and answer QUESTIONS to add to the phrase. Complete the phrase to win POINTS. Progress along the points bar to win CASH PRIZES. Watch for MYSTERIES(?)! GOOD LUCK!

The game starts with the selection of a Hangman phrase. At the top of the screen there is a points trail, in the form of an undertaker's tape measure, with money bags placed along it. Each money bag has a different cash value, ranging in value from £1 to £20. The trail position of each money bag corresponds to the points needed to win the cash value shown on the bag.

Beneath the points trail, there are three WANTED posters. Each poster has a clue to a Hangman phrase, and a points value. To select a phrase, the player chooses one of the posters.

On the question screen, the player is shown a question from their chosen category together with three alternative answers, only one of which is correct.
The game ends if:
After successfully answering a question, the game returns to the main game screen. If at this point the Hangman phrase is complete, the game returns to the phrase selection screen. The points value of the completed phrase is then added to the player's points total, and the player chooses a new Hangman phrase.
In the MYSTERY BONUS round, the player is briefly shown four WANTED posters, each with a different bonus prize. The bonuses on offer can be positive or negative, but there is always at least one positive bonus available for the player to choose.

The undertaker vulture character was replaced with a Mexican bandit

Martin completed development of the game in April 2004.

Hangman Reloaded was released on GamesNet in April 2004. It was subsequently also released on JPM's Nexus platform in 2005.

Hangman Reloaded was developed at the request of GamesNet. The idea was to see if completely renewing the graphics, whilst keping the question database and game play of the original game, would result in a boost in the game's popularity. However, even after Hangman Reloaded went live, Hangman 2 continued on SWP menus for several more years.