House Of Tiny Treasures is an Americana-themed picture observation game. It is a points-based tournament skill game for social media platforms.

House Of Tiny Treasures is a game of find-the-object. You have 3 minutes to find as many objects in the house as you can.

Every game starts in the Hallway, then you'll take a tour of the house. Each object is worth an amount of points, apart from the clocks and timepieces, which give you extra time.

House Of Tiny Treasures is a deceptively simple test of observational skill. The game takes place in an old American house, full of household items and collectables. Outside there is a garage, a boat house, a treehouse, a crypt, a porch, and a garden with a shed - all full of clutter. The game always begins in the Hallway.
The player is asked to find a number of objects, 3 of which are named. All of the named objects are visible, but are not always easy to locate, because of the sheer number of objects in the room.
Touching one of the 3 named objects eliminates it from the room. Repeatedly touching objects, that are not any of the named ones, incurs a time penalty. The player earns points for every object that is eliminated, except for clocks and other timepieces, which earn extra time.

When all of the requested objects have been found, the player is shown a plan view of the house, and taken to one of the other rooms. If there is less than 10 seconds time left at this point, the player is given an extra 10 seconds. The game ends when the time finally runs out.

Game development commenced in March 2011 and was completed in April 2011. Martin initially wrote the game in Flash AS2, but ported it to AS3 in April 2011. 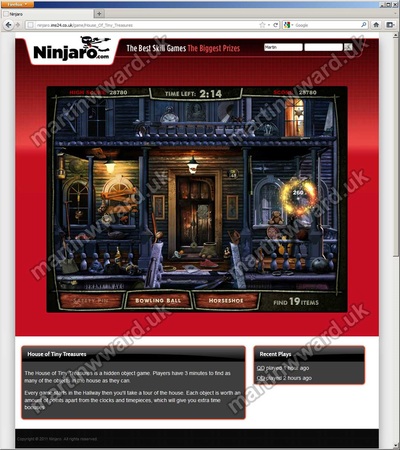 The game went live on IMS24's Ninjaro website in autumn 2011.