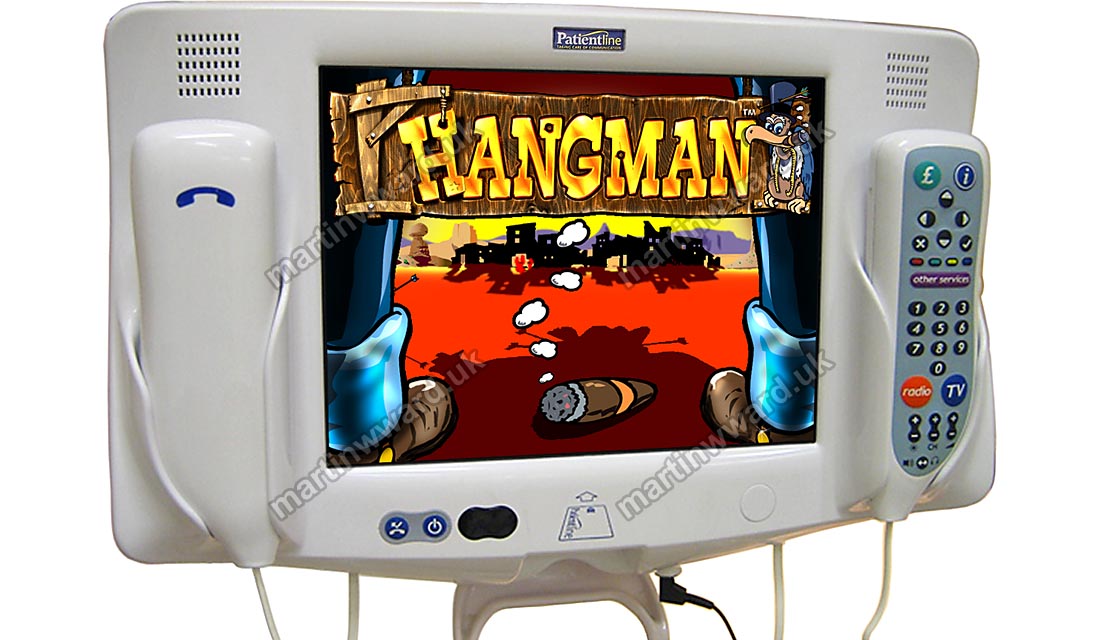 Hangman Patientline is the hospital bedside entertainment system version of JPM's hit SWP pub quiz game Hangman 2. It is a multiple choice question and answer video game. The game is based loosely on the traditional paper and pencil Hangman word game.
At the start of each game, the player is shown three WANTED posters. Each poster has a clue to a different Hangman phrase. The player must select one of the three posters.
The player is then shown the main Hangman game screen. At the start of the game, the player's Hangman character has all six body parts missing.

The possible POSITIVE bonuses are:
The possible NEGATIVE bonuses are:
After successfully answering a question, the game returns to the main game screen. If at this point the Hangman phrase is complete, the letter tiles turn over, one after an other, each revealing 100 points. The points for each tile are added to the player's total score. The game then returns to the phrase selection screen, and the player chooses a new Hangman phrase.

Martin's Hangman Patientline was the first JPM game to be developed for Patientline's T2 entertainment terminal. At the time of development, in 2003, Patientline had only one version of their T2 terminal. This was their Windows CE embedded device. The Win CE embedded T2 terminal has a restricted memory of only about 4 MiB of RAM, and utilises 8-bit graphics.

Hangman Patientline was compiled as a Windows CE dll using Microsoft's Visual Studio CE compiler. The DirectX graphics calls of Martin's original standard Windows-based Hangman 2 game were all accessed via a wrapper interface that Martin had developed. Martin developed a similar wrapper for the T2 custom hardware graphics functions of Patientline's Win CE device. This enabled much of the Hangman 2 game's original C source code to be used with little modification.

All graphics were developed for a 16-bit graphics target, and were then quantised for the Win CE T2 platform, using an optimised 8-bit palette. A points-based prize system, similar to Martin's earlier Hangman Tournament game, was used to replace the original Hangman 2 cash prizes. However, in the Patientline game, cash rewards for top-scoring games were not available to the player.

In 2005, when Patientline launched their improved XP embedded T2 terminal, Martin developed a 16-bit graphics version of the game. This version was again compiled as a dll, but in this instance, using Microsoft's standard Visual Studio. 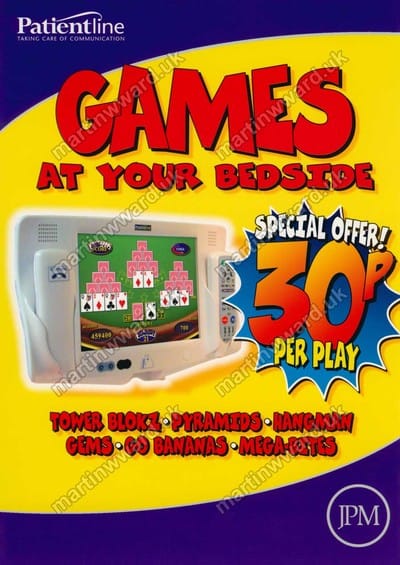 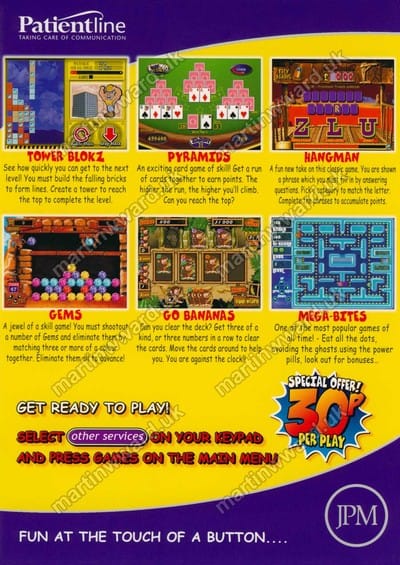 In August 2005, the 16-bit graphics Windows XPe version of the game was launched on Patientline's revamped T2 bedside entertainment terminal.