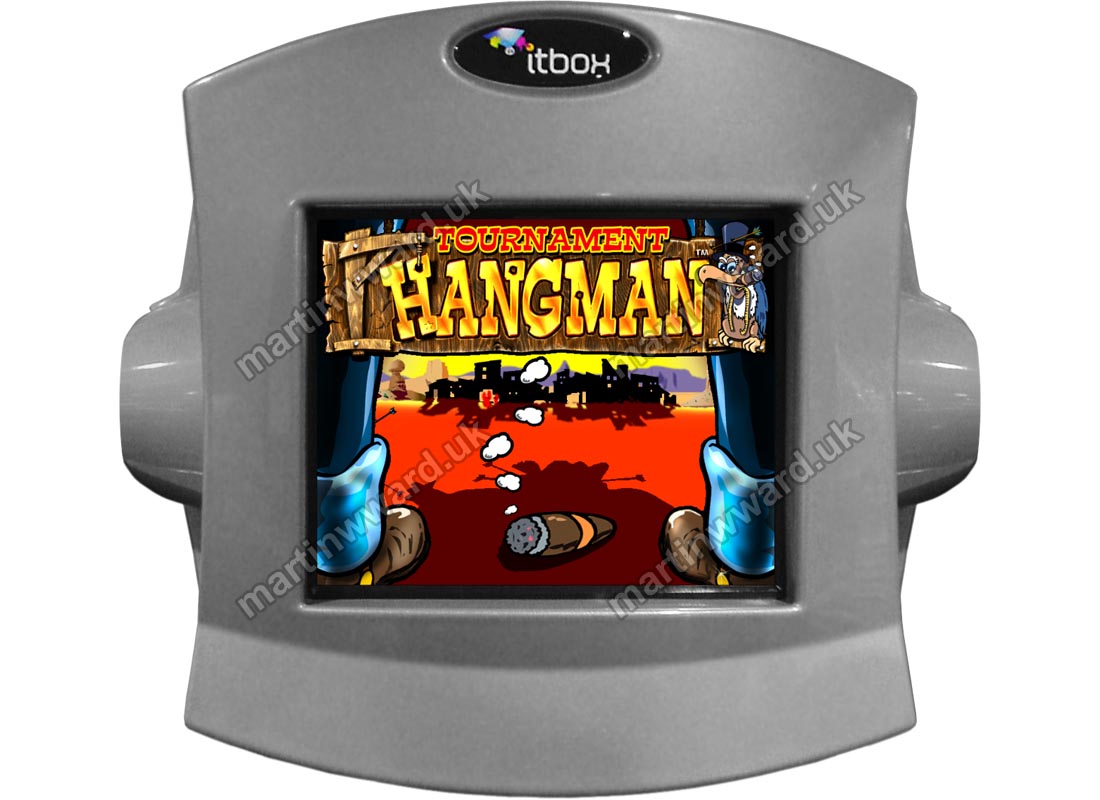 Hangman Tournament is the connected terminals points-based tournament version of JPM's hit SWP pub quiz game Hangman 2. The game is a multiple choice question and answer video SWP. Players of top-scoring games are rewarded with a big cash prize, or one of a variety of other valuable prizes that may be on offer. Hangman Tournament is based loosely on the traditional paper and pencil Hangman word game, and runs on both GamesNet and ItBox platforms..

Choose your CLUE and attempt to solve the MYSTERY PHRASE before you're lynched! Choose a LETTER and answer QUESTIONS to add to the phrase. Complete the phrase to win POINTS. Watch for MYSTERIES(?)! GOOD LUCK!

At the start of each game, the player is shown three WANTED posters. Each poster has a clue to a different Hangman phrase. The player must select one of the three posters.

The player is shown a question from their chosen category together with three alternative answers, only one of which is correct. The player must choose the answer that they think is correct. There is a time limit for the selection, which is shown graphically by a shrinking red bar on the undertaker's tape measure at the bottom of the screen. There is also a points value on the tape measure, which counts down as the question time runs out.
The game ends if:
In the MYSTERY BONUS round, the player is briefly shown four WANTED posters, each with a different bonus prize. The bonuses on offer can be positive or negative, but there is always at least one positive bonus available for the player to choose.

The possible POSITIVE bonuses are:
The possible NEGATIVE bonuses are:
After successfully answering a question, the game returns to the main game screen. If at this point the Hangman phrase is complete, the letter tiles turn over, one after an other, each revealing 100 points. The points for each tile are added to the player's total score. The game then returns to the phrase selection screen, and the player chooses a new Hangman phrase.

When the game ends, if the player has a high enough points total, they are shown their rank in the game's high score table, and asked to enter their initials.
The player is also asked to create a PIN code. In the event of winning a tournament prize, the player will be asked to re-enter this code during the claim procedure.
At regular intervals throughout each tournament, the central server collates the high score tables from each terminal to form an overall national high score table. Players can check this leader board at any time before the tournament ends.
When a tournament ends, the central server takes the latest national high score table to form the list of national winners. If a player has won a prize, they can then claim it, using the PIN code that they previously used to enter their initials.

Martin developed his Hangman Tournament game for the GamesNet system in 1999, using his Hangman 2 game as a base. The requirements of a tournament version of Hangman necessitated the removal of all instant cash prizes. In their place, points-based prizes were added. The points awarded for completing each phrase were also changed. Instead, points are awarded for each individual letter of a completed phrase. Additionally, in the tournament game, points are awarded for every correct answer, in direct proportion to the speed of selecting the answer. Various display pages were required to be added to the game, to enable players to view game information such as the current national high score table, the prizes on offer in the current tournament, and the details of national winners of the previous tournament. All of these pages are accessible from buttons that were added to the main start screen.

Communications between the Hangman game client and GamesNet's central tournament server relied heavily on the use of modifying entries in the computer's registry.

In 2003 LeisureLink developed a competing national tournament system, using their own ItBox platform. The protocol used on ItBox was largely TCP/IP-based. Martin's Hangman Tournament was, once again, one of the first games to be launched on the new platform.

Even though the underlying technologies were different, the visual design requirements of both GamesNet and ItBox tournament games remained broadly the same. This enabled Martin to develop a generic tournament wrapper interface that facilitated the development of a single Hangman Tournament game client that could run on either GamesNet or ItBox. Martin completed the generic tournament version of Hangman in 2003.