Big Wheel is a feature-rich slot game with a fun-fair theme. It has a 3-reel base game, and a bonus trail with wheel spins, win multipliers, and 8 fairground features. The game also includes an optional gamble.
As one observer noted about Martin's Big Wheel Flash game ...

Big Wheel is the holy grail of online games. It successfully combines the high tech feature trails of 1990s pub fruit machines, with the stakes and prizes of online slots. 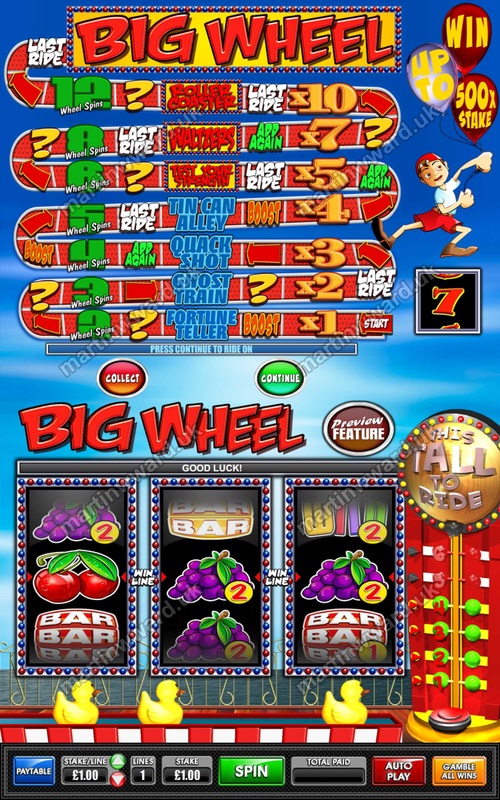 The game play area covers 2 screens. Above the main reels screen there is a bonus FEATURE TRAIL. This can be viewed before starting a game by pressing the PREVIEW FEATURE button.
To win, the player must match 3 reel symbols on the win line, or reach THIS TALL TO RIDE on the bonus trail. All line pay symbols must appear on the win line. Only the highest win on the win line is paid. Bonus wins are added to pay line wins.

The WILD symbol substitutes for all symbols.
Some reel symbols have numbers on them. At the end of each spin, even if there is no paying win line, all the numbers on the win line are added to the bonus trail:
In the PICK A DUCK bonus, 3 ducks swim into view. Each duck has a hidden number. The values of the ducks are always 1, 2 and 4 (in random order). The player must pick one of the ducks. The value of the chosen duck is then added to the bonus trail. If the bonus trail position reaches THIS TALL TO RIDE, the FEATURE TRAIL starts.

The screen scrolls down to reveal the bonus FEATURE TRAIL game.
The FEATURE TRAIL is fully interactive. The player is always given the choice of whether to COLLECT the current win, or CONTINUE
(unless the end of the trail has been reached, in which case the bonus automatically ends).

In the FORTUNE TELLER feature, the player must select one of the 3 crystal balls to reveal their fortune.
In the GHOST TRAIN feature, a ghost train rolls past. Each carriage has a cash value attached. Some carriages are worth more than others. The player must press STOP to halt the train. The sum of the values of the next 3 carriages is then awarded.
In the QUACK SHOT feature, 7 rubber ducks float into view. The player must press the STOP button when the moving cross hairs are over their chosen duck. The duck is then knocked down, and a target pops up in its place:
The TIN CAN ALLEY feature consists of 2 stages:
In the TEST YOUR STRENGTH feature, the player is given 3 attempts to test their strength on the strength-o-meter. The strength-o-meter dial has a scale of multiplier values. The player must press the button to launch the pointer round the dial. Each value lights up as the pointer passes over it. After the highest point is reached, the pointer bounces back down to zero. The highest value reached by the pointer remains lit. The cash value from the player's best attempt is awarded.

In the WALTZERS feature, 4 waltzer cars are set spinning, and gradually come to a stop. When the waltzers have stopped moving, the value pointed to by the 'WIN' arrow is added to the 'TOTAL WON'. The waltzers then spin again, and the process repeats, until one of the waltzer cars land with the 'WIN' arrow pointing to 'STOP'. The final 'TOTAL WON' value is then awarded to the player.
The ROLLER COASTER feature consists of an undulating trail of multiplier values - the top value is 'x250'! The player pops balloons at the bottom of the screen by clicking on them. Each balloon reveals either a number or a 'STOP':
The BIG WHEEL feature consists of 2 stages each featuring a giant spinning wheel of prizes:

In stage 1, the Big Wheel spins, and stops on 1 of 12 multiplier values:
In stage 2, the MEGA SPIN wheel spins, and stops on 1 of 12 mega-multiplier values. The player is awarded a prize equal to their stake multiplied by the value shown, and the bonus ends. This value can be as high as 500 x the player's stake! - which is the top prize in the whole game.
If the player chooses to, they can gamble their winnings up to the maximum win in the gamble game.

As is standard for online slots, the game is totally random. The outcome of previous games has no influence on any subsequent game. Owing to the interactive nature of the game, and the choices open to the player in the feature trail, the game has different average payouts if different strategies are used.

The game's help screen informs the player that, whenever there is a choice to COLLECT or CONTINUE, the best strategy is:

The Flash game design was based on the original B3 game of the same name. The B3 game runs on a dual screen cabinet, with some of the trail features being played on the base game reels.

For Martin's Flash game, new graphic-based features replace all those features which would have required returning the player to the base game reels. The all-new graphic features include FORTUNE TELLER, GHOST TRAIN and WALTZERS. The original dual screen TEST YOUR STRENGTH feature was also reworked for the Flash game. The WALTZERS feature was the most fun to develop - the waltzer cars rotate on the end of arms which themselves are rotating.

Martin also added several flourishes to the game, including the appearances of the comical rubber ducks that quack their approval whenever the player achieves a big win in the features.

Big Wheel was a massive development project, containing 3 or 4 times as many features as the average online slot game. Martin commenced work in autumn 2011, and completed the game in spring 2012.